An Evening with Linling Lu 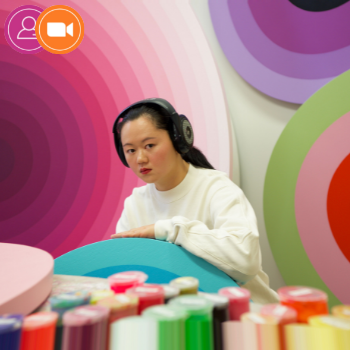 You might know what Vivaldi’s Four Seasons: Winter sounds like—but what does it look like? The KIA’s Chief Curator, Rehema Barber, will join artist Linling Lu for an in-depth conversation about her artistic practice, which gives color, shape, and form to the music that plays in her studio while she works. Vivaldi is just one of her many musical muses. Linling Lu: Musical Meditations, on view through June 5, contains a series of paintings created from 2019 to the present, many of which were composed during the two-year period of the ongoing pandemic. Lu views these works as a means of “healing from the chaos and uncertainty of life.” Her large, circular canvases pulsate with color and invite viewers to reflect on their own memories and connections with music, as well.

Linling Lu received a BFA in painting from Maryland Institute College of Art (MICA) in 2008 and an MFA from the Hoffberger School of Painting, MICA in 2011 with honor. Linling Lu’s painting compositions are currently on view at Fields and Formations, A Survey of Mid-Atlantic Abstraction — a traveling exhibition at The Delaware Contemporary Museum and American University Museum. Her work is included in public and private collections nationally and internationally and in the permanent collection of Embassy of The United States of America in Beijing among a group of artists including Cai Guo-Qiang, Maya Lin, Betty Woodman, Xu Bing, Jeff Koons, and Fred Tomaselli. The artist currently lives and works in Baltimore.

The KIA will be offering both in-person and virtual tickets to this artist’s talk. Please RSVP accordingly.