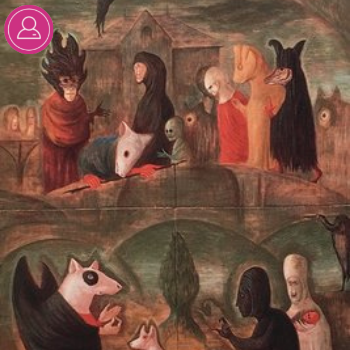 From the publisher: One of the hallmarks of Surrealism is the encounter, often by chance, with a key person, place, or object through a trajectory no one could have predicted. Penelope Rosemont draws on a lifetime of such experiences in her collection of essays, Surrealism: Inside the Magnetic Fields. From her youthful forays as a radical student in Chicago to her pivotal meeting with Andr Breton and the Surrealist Movement in Paris, Rosemont–one of the movement’s leading exponents in the United States–documents her unending search for the Marvelous.

Surrealism finds her rubbing shoulders with some of the movement’s most important visual artists, such as Man Ray, Leonora Carrington, Mimi Parent, and Toyen; discussing politics and spectacle with Guy Debord; and crossing paths with poet Ted Joans and outsider artist Lee Godie. The book also includes scholarly investigations into American radicals like George Francis Train and Mary MacLane, the myth of the Golden Goose, and Dada precursor Emmy Hennings.

See works inspired by the surrealism movement in Surrealish: The Absurd and Unexpected.