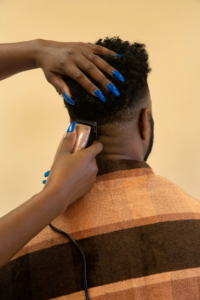 Shape-ups at Delilah’s is a short story by Rion Amilcar Scott, first published in the October 2019 issue of The New Yorker Magazine, and in Best American Science Fiction and Fantasy 2020. The story takes place in the world of Crossriver, a town and characters created by Scott in his other publications. The town’s premise was inspired by the Haitian Revolution during which enslaved Haitians rose up and successfully reclaimed their independence. In Crossriver, the Great Hair Crisis has robbed every haircutting man of his power to cut. A woman named Tiny has arrived as the new greatest barber in town and she can end the crisis if the dudes will let her.

Both written and audio versions of Shape-Ups at Delilah’s can be found online.